April 17, 2017: We’ve scoured the Web to find the best and most compelling animal stories, videos and photos. And it’s all right here.

Image: April the giraffe and her baby boy

Arguably the most famous giraffe in the world, April at the Adventure Animal Park in Harpursville, N.Y. gave birth on Saturday. After an initial prediction that her calf would come in January or February, millions of people tuned into a live feed eagerly waiting to see the calf’s birth. As the days passed and no calf appeared, the Internet speculated about the delay, including some humorous joking about April “faking” her pregnancy. But now, “both mom and calf are doing fine,” Jordan Patch, the owner of Animal Adventure Park, said in a statement. — Read it at NY Times

Cats at the Etobicoke Humane Society in Ontario used to sleep on the cold, hard floor — that is, until furniture store IKEA stepped in. The company donated 10 doll beds (as well as $300) so the cats have a soft place to rest their heads. “Our floors are easy to clean but not terribly comfortable to lay on. Now cats like Catsby and Frankie have beds of their own to curl up in,” the shelter’s Facebook post read. — Read it and watch it at Huffington Post Canada

A new study has found that hunting has a big impact on wild animal populations, finding that mammal and bird populations dropped on average by 83 percent and 57 percent, respectively, in areas close (within four to 25 miles) to access points such as roads or villages. “Strategies to sustainably manage wild meat hunting in both protected and unprotected tropical ecosystems are urgently needed to avoid further defaunation,” said study leader Ana Benitez-Lopez of Radboud University in Nijmegen, the Netherlands. “This includes monitoring hunting activities by increasing anti-poaching patrols and controlling overexploitation via law enforcement.” — Read it at Seeker 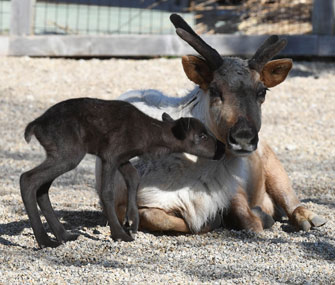 Just in time for Easter, a reindeer named Bunny delivered a fawn at Brookfield Zoo in Chicago. This is the first reindeer birth at the zoo since 1980, and it’s a welcome one: Reindeer populations are declining, largely due to climate change. The International Union for Conservation of Nature lists reindeer as Vulnerable, and two of the 14 subspecies have already gone extinct. — Read it at Zooborns

After escaping a house fire, a cat named Boots found shelter in the dashboard of a car — and then couldn’t get out. A team at Mark Thomas Motors in Albany, Oregon, worked for several hours to free him. “It was unreal how bad the cat was stuck in that dash, our team performed miracles how fast they got that dashboard apart to get that poor kitty out, it was a great team effort and I am very proud of everyone,” said Mark Patrzik, the dealership’s general manager. Boots is now home safe with his owners. — Read it at People Pets